A land where an Avatar dwells remains charged and pure for many centuries. This land is special. It is conducive to right action and right thought. If any seed of Sat Karma (Good Karma) is sown in the land of Shivpuri, it sprouts and blossoms into a big tree within no time and effort. - Shree

The location where Shivpuri is presently situated was initially defined as a special area by Shree Swami Samartha Maharaj. During one of His journeys, Swamiji stopped in Shivpuri area and sang a hymn of Lord Shiva. This was His indication of the times that lay ahead and to foretell the fact that this land would be known far and wide as the land of Purity and Knowledge. Shivpuri is also where Swami Shivananda, a Shiv Yogi, and Shree’s father chose to have his Samadhi.

Before buying this piece of land in the year 1953, Shree witnessed many auspicious signs here. He had seen the Rising of the sun on the horizon when he first cast his glance on the piece of land which quite aptly so, was later on named Shivpuri, by Shree Himself. To Shree, the rising sun symbolized the ushering in of the New Era of Science, Universal Brotherhood, and Peace. Shree has also referred to Shivpuri as Bhu Kailasa or the Kailasa on Earth, depicting purity and healing.

Shree referred to Shivpuri as the Seat of His Dharma and His Dhamra Rajdhani (Capital).

Shivpuri is located 3 kms to the north of the town of Akkalkot. Shree founded Shivpuri with an objective of spreading the knowledge of the Guru Tradition all over the world. An international center and global headquarters of the Vishwa Foundation, Shivpuri is a Vedic Eco Community that blends ancient wisdom with modern technology.

Spread over 150 acres of organic farms, themed gardens and Ayurvedic plantation, it’s a global community that attracts visitors from all around the world. Thousands of people from all over the world visit the Ashram to learn the concepts of PSM and experience healing vibrations.

The tradition of offering Prasadam that is going on in Guru Mandir is also going on in Shivpuri. Shivpuri also has all the modern accommodation facilities for guests and participants of the various courses, retreats and events organized by Vishwa throughout the year.

Details of Daily Schedule at the Ashram

Sharanagati Satsang- every Sunday at 8.30 am

This is the Main Gate which is used as an entry point in to Shivpuri on special occasions. The Gate is majestic. The Dharma Dhavja (the Dharma Flag) is unfurled on this gate on every Padva, the begining of the New Year, as per the Vedic Lunar Calendar. This flag denotes the victory of Good over evil and of Light over Darkness. 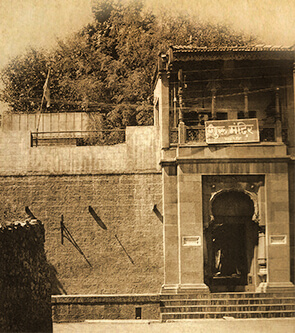 There is a story behind this gate. On the day, when the BhoomiPoojan (Foundation Laying) of this gate was to be done, Shreeji was having pain in His legs and was running a high fever People urged Him to not walk much and postpone the event to a later date. But Shreeji did not pay any heed to these requests. He said that He will not postpone or cancel the event. He said that through this gate millions and millions of people are going to pass through to attend the celebrations and events that will be held in Shivpuri. He further said that for laying the foundation of such an important gate even if His leg gets broken, He would not mind. With such an energy Shreeji has layed the foundation stone of the majestic MahaDwara.

The MahaDwara has beautiful carvings on all the sides. They are all ShubhChinna (Good Omen) as mentioned in the ancient scriptures.

Shiv Mandir is the Samadhi place of Swami Shivanand Yogendra Maharaj. This was the first monument created in Shivpuri, after the land was acquired. This was done in the year 1954. Shreeji Himself has layed the stone for the Samadhi. The site was marked with a small platform. Then when the MahaSomyaga was announced in 1969, the construction of the entire structure began. The Shiv Mandir and its Shikhar were built before the MahaSomayaga.

The Shikhar (Top End of the Building) with its glowing Kalash can be seen from a great distance. Great detail can be seen in the carvings made on the Gopura (Style of Architecture). Every Idol has been very carefully carved and even minute details have been taken care of. They say if one looks carefully, the idols actually start looking life like. The sculptures on the Gopura depict many ancient mythological incidents and stories. 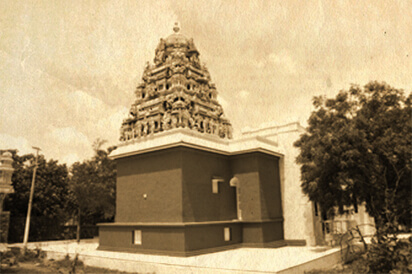 On a floor above this, one can see another white Shiv Linga. This is the Yagneshwar Somnath Linga. Jyotirlinga is a radiating point in the subtle energy circuit that manipulates the atmosphere beneficially.

In the SabhaMandap (Main Hall), a beautifully carved monument has been erected as the seat of swamiji's statue. It has been specially carved by experts from Rajasthan, which is famous worldwide for carvings and sculptures. It is made from Pure White Marble.

After coming out of the Shiv Mandir, one can see another beautifully carved temple exactly in front. This is the BhagwatiSonamata Temple. Shreeji had this monument built in the memory of the Holy Mother BhagwatiSonamata. 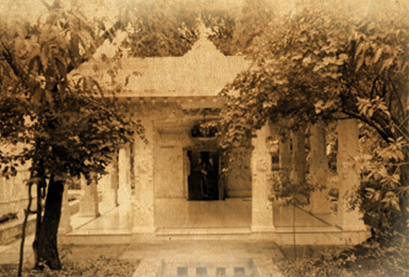 BhagwatiSonamata is Shreeji's mother, who served the poor and needy all Her life. She took Samadhi at the young age of 24 years, after toiling all Her life for the betterment of the down trodden.

This is also a very beautiful Temple. It also has a similar GopuraShikhar like the Shiv Mandir. The Temple also has two parts Back half and Front half. The Back Half has been covered by White marble from the outside. It has the majestic Shikhar, on top of which the Kalash has been placed. Under this Shikhar, a life like statue of BhagwatiSonamata has been placed. Behind this statue, a TulsiVrindavan(Holy Basil) has been built. 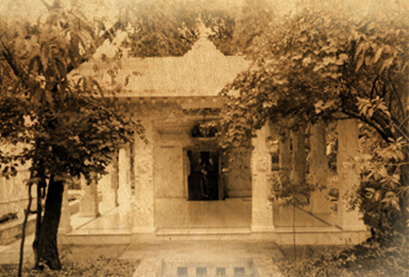 This is the exact place where the Yagnya Vedi or Kunda (Altar) of the MahaSomayaga was built. The Kunda have been permanently preserved by casting them in stone. 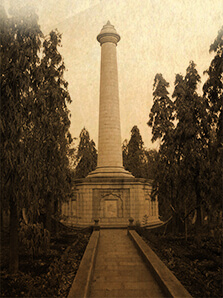 This massive Pillar stands at the place where the YagnyaPurnaAhuti of the MahaSomayaga was done. Shreeji said that this Pillar signifies the ushering in of the Era of happiness and truth. This Pillar is reminding everybody, that the Light of peace and harmony is spreading throughout the planet.

This Towering structure is 40 Ft tall and is made from stone blocks. It has a Hexagonal base. On each side are carved the messages and teachings of Shreeji. They have been carved into a plate of white marble and then etched in golden color. On top of the Pillar, a burning flame, also carved from the stone that was used to build the Pillar, has been placed.

The Lord Parshuram temple has been covered with a beautiful red marble. A GopuraShikhar has also been built over this Temple similar to the Shiv Mandir and BhagwatiSonamtaMandir.

In this Temple, the White Marble Idol of Bhagwan Shree Parshuram has been placed. The Bhagwan Parshuram Padukahasalso been placed here. On top of the Temple, the Dashavatar, has been depicted, through beautiful statues.

After The Bhagwan Parshuram Temple, one can see a very beautiful statue of a Cow, under a magnificient monument. This is the Go Samadhi. A stone image of a Cow, in a sitting down position has been placed under a Stupa like monument.

Shreeji had The Go Samadhi (Cow Memorial), built in Shivpuri in the memory of the Cow, whose milk and ghee were used in the 1969 MahaSomayaga in Shivpuri. Shree once said about this cow: It is Kamadhenu alone (cow that fulfills all desires) whose Samadhi is situated at Shivapuri. This was the first cow in Gurumandir. Her milk was so tasty as if it were mixed with saffron and sugar. It used to yield milk at any time. She gave more milk than the best breed of cow could give.

On the way back, near the YajnyaVedi, Cannon, made from stone has been kept. Shreejirefered to this Cannon as the Shatgni.

Shreeji's Samadhi has been placed on the same place, where His residence a bamboo cabin with straw roof, was built, during the MahaSomayaga, from where He watched over the entire event.

This is also the same place where Kashi Vishwanath Bhagwan Shiva , in the disguise of a Saint, had met with Him and had expressed the desire to reside in Shivpuri. A cane cabin has been erected, at the site today to denote the exact area of His Samadhi.

This is the Samadhi place of BhagwatiSharadamata, the wife of Shreeiji. This has been built very close from the site of Shreeji's Samadhi. A cane cabin has been erected, at the site today to denote the exact area of Her Samadhi.

This is the Samadhi site of Shree Shreekanti Maharaja the Son and Spiritual Heir of Shreeji. This has been built in between both Shreeji and Vahinisahebs Samadhi place. A cane cabin has been erected at the site today to denote the exact area of His Samadhi.

This beautiful Temple has been built near the Ayurvedic Centre.Tatyaji Maharaja was Shreeji’s Grand Father. Though He was a King, He had the knowledge of Ayurveda and Astrology by intuition. He spent all His life trying to provide healing and relief to the sick and ailing. A bust image made from Bronze has been placed in the Temple. It is in between the Ayurvedic Centre and the Ayurvedic Manufacturing Unit. It is surrounded by a garden consisting of rare Ayurvedic Herbs and beautiful flowering plants.