Shree was born in the Rajimwale family, which was Royal family living in central India.
Originally this family belonged to Savlapur town near Amravati in the Vidarbha region of Maharashtra. To prove their valour and seek prosperity they came to Chattisgarh and settled down in Rajim, a small town near Raipur. Therefore their earlier surname of Savlapurkar was now changed to Rajimwale. Rajim is acknowledged as the most holy and ancient place in Chattisgarh region in India.

The pilgrim town is known as the earthly paradise of Lord Vishnu. The area's deity is Lord Rajivlochan. It is not known when the Rajivlochan temple in Rajim was built. Historians state that it was built sometime in the later part of the 5th century. Tradition, however, proclaims Rajim to be an ancient pilgrimage centre.

Affluence was at peak in this family and they all had great devotion for Lord Rajivlochan. Correlated to Shakal branch of Rigveda this family belonged to the most exalted & Jamdagnya Gotra lineage connected with the five great Seers - Bhargava, Chyavan, Apnavan, Aurva and Jamdagnaya.

This highly cultured and noble family produced great personalities who were adored by the people because of their genuine philanthropic nature. The basic quality of all the Rajimwale’s was that despite being born in a very rich family, they never indulged in lavish life styles nor concentrated on their own comforts and luxury but lived a simple life. They all were very religious, believed in helping and serving the needy, feeding the poor, conducting their business fairly and spending as much time as possible in religious austerities, penances and serving the holy saints.

Their pure virtuous qualities, clean, dynamic yet pious behaviour and their genuine concern for welfare of the people was maybe the reason why the Lord protected and blessed the family so that they had a lineage worthy of their reputation.

Swamiji was a strict follower of the discipline of Aparigraha (non acceptance or collection of items). He was a devout exponent of the Naad Brahma or Shabd Brahma concept of spirituality. Many people who lived with Him have said that they heard the Omkara or Pranava, the Primordial Sound or Naad of the Bramha from His breathing. He would spend days and months living in isolation and in deep meditation. He was always found sitting in deep contemplation. He took Sanjeevan Samadhi in the year 16th April 1954 in Shivpuri, India.

Shree’s Mother was Bhagwati Sonamata, who was a Yogini and a disciple of Sadguru Shri Upasani Baba, a disciple of Shri Sai Baba of Shirdi, who was a great saint and an ascetic of the highest order. She was a queen and the ruler of a large area, but every day she would start the day by cleaning the streets along with the poor people who were entrusted with the job. She would carry the dirt and garbage that would be collected from the city colonies, on her head and throw it in the dump outside the city.

She spent her entire lifetime serving the people in the poorer section of the society. She would feed the hungry and attend to the sick. She had dedicated her entire life towards service of humanity.

She abhorred the caste system prevalent in India at that time and would clean the houses and bathe the children of the people who were forgotten by the society. She also spoke out against the ill treatment of people afflicted with ailments like leprosy, who were made to live outside the city limits. On a Diwali Day, She invited a man suffering from leprosy to be a guest in their palace for the festivities. She initiated the chanting of the Kalikalmashnashak Mahamantra :

The Chanting Festival She started in Khargapur, India is still being observed every year in Shivpuri, known as Akhnad Taal Saptah (a seven day festival of chanting and meditation). She took Samadhi at the young age of 24, in the year 1925. It has to be noted that the Gayatri Mantra also has 24 syllables as was the age of Sonamata when she gave up Her earthly body.

At the age of 21, Shree was living in Guru Mandir and was performing severe penance. He had been appointed the Peethadeesha and was following His routine with utmost devotion. He was contemplating becoming a Sanyasi.

One day in a vision, He as told by Shree Gangadhar Maharaj, that He was to marry a person,chosen for the Divine Mission. Shree and Shradamata were married on 7th May, 1939, in the Balappa Math at Akkalkot. Sharadamata was born in Akkalkot in September 1923. Like Shree, Sharadamata too led a strict, disciplined, spiritual and austere life. She strongly believed in the thought that the ‘Whole Universe in My Home”. Shree’s devotees and disciples were her large and boundless family. Sharadamata was a mother to the innumerable disciples and devotees and was like the most desirable Universal Mother for the countless women folk of the town providing them the needed affection of a maternal parent. Having realized and experienced her angelic demeanour throngs of devotees constantly kept moving around her at Gurumandir. Sharadamata provided the best of hospitality to all the visiting guests. There never was made any distinction about any one’s age, caste, religion, language or province etc.that the Gayatri Mantra also has 24 syllables as was the age of Sonamata when she gave up Her earthly body. 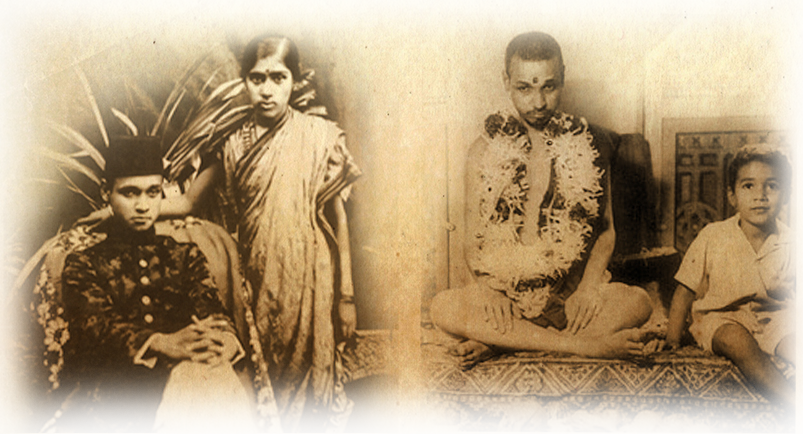 Shree had two children, a daughter named Renuka and a Son, Shreekant.