Shree was born in the town of Kharagpur, in the state of West Bengal in India at 12.42 am on 17 th May 1918. Four Years before the birth of Shree, His Mother, Sonamata, had 14 divine visions and dreams.

Unfolding the meaning of the visions, Her Guru, Shree Upasani Baba, had foretold to Her, that “The Light of the World is going to be born as Her Son”. Despite of owning spacious palaces in Rajim, Shree was born in a small house situated in the vicinity of the social outcasts. He would often say that though I was born in a royal family, I choose to be born in that place, because I have come here for them. I have come here to see that all such injustice, inequality and barriers are removed. I have come to bring Dharma, peace and happiness to the ones who have been kept away from it for thousands of years.

Right from birth child Shree was gleaming with divine lustre. The ever present divine splendour on his being attracted everybody towards Him. The telling auspicious signs on his body were in mute testimony the Divine Power having manifested in the form of Shree.

This brings to mind the memory of the birth places of earlier divine great men. Lord Shrikrishna was born in the prison where his mother was in captivity, Lord Buddha was born in a forest instead of a palace and Lord Jesus was born in a manger in a cow-pen. Moreover, at the time of the descent of Zarathustra and Jesus Christ there was a glimpse of Divine Light and Divine Star in the sky respectively. Sonamata too had seen Divine Light. This likeness is significant because Light is the final emerged intense image of Fire and similarly is the symbol of splendour and divine power. The various indicative dream visions Sonamata, had were undoubtedly the sure revelations that theLight of the Universe She was going to conceive would also be an epoch-maker 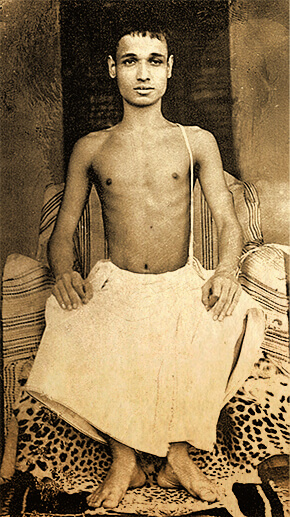 Following signs could be clearly seen on Shree body:

Shree Swami Samarth Maharaj is considered the fourth Incarnation of Lord Dattatreya. It is said that He performed severe Tapa (Austerities) and Sadhana for more than 300 years in the Shri Shailam forest in southern India. After completing His Sadhana, He travelled to the various holy places in India. Finally He appeared in the town of Akkalkot in the year 1856. Swamiji throughout His stay in Akkalkot had been leading disciples towards the most esoteric and ancient path of finding inner peace and happiness. Swamiji set up a Guru Peetham (Lineage) for the revival of this ancient wisdom. 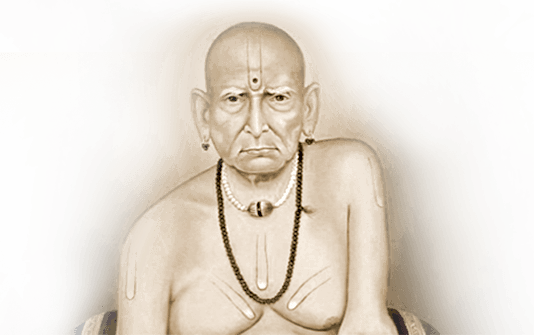 The purpose of the Guru Peetham was to convey to the world the true essence of wisdom and Dharma lost over time.

Swamiji before, taking Samadhi, choose His closest disciple, Balappa Maharaj, as His Spiritual Heir. He gave Diksha (initiation) of the Mahamool Mantra, along with all His personal belongings and asked Balappa Maharaj to take the message of the Dharma to the world.

Shree Balappa Maharaj set up a monastery to house all the consecrated belongings of Swamiji like His Charan Paduka (Sandals), Rudraksha, etc and create a place where the devotees could come to take Darshan and Prasadam. This monastery was later renamed as the Guru Mandir by Shree and today is the place of the Guru Peetham.

Shree Balappa Maharaj and after Him, Shree Gangadhar Maharaj, who succeeded Him, travelled all over the country and spread the message of Bhakti (devotion) and Dharma far and wide.

Shree moved to the Guru Mandir monastery, at the age of six. Shree had shown a strong inclination towards the spiritual life from a very early age. He would routinely get up at four am and start His day by taking a dip in the river that flowed close by. He would then sit in meditation and recitation for hours. He would then clean the entire monastery. Then he would go from house to house asking for alms. When enough food would gather in His bag, he would take it to the river and dip it in water to rid it of any taste. This was done in the Yogic traditions to avoid any attachments to food. The food would then be taken to His Guru first to seek His blessings and then eaten.

He continued this rigorous routine for many years and lived the life of a monk. He spent His childhood in the vicinity of great Spiritual masters. He learnt the teachings of many learned scholars along with the teachings of the Vedas. Shree would do severe penances and meditate for almost 18-20 hrs every day.

At the age of 20, on 11th March 1938, He was chosen as the spiritual heir of the tradition of Guru’s, initiated by Shree Swami Samartha Maharaj. He was made Head of the Guru Mandir monastery. The holy symbols of the Math, the golden Seal-ring on which were engraved the words
'Shree Swami Samarth' was put on Shree’s finger, the holy ‘Ek Mukhi Rudraksha’ bead garland was put on his neck. The ‘staff’ and ‘Chati’( Holy Cloth) too were handed over to him.

This done, the Mala or Rosary was put in Shree’s hand and three times, Shree Gangadhar Maharaj uttered in Shree’s right ear the traditionally received sacred ‘Mahamool Mantra’. Since then Shree took charge of the activities of the Peetham and followed strict Tapa and continued to live an austere life.

He was initiated into the highest order of Spiritual Practice by Lord Parshuram. Lord Parshuram in considered as the sixth incarnation of Lord Vishnu. He is said to be the Chiranjeev Avatar (Immortal God-Head) and is said to have been the Guru of all the Avatar after Him. He was born to Maharishi Jamadagni and Renukamata. He belongs to the Jamadgani lineage, same as Shree.

In the year 1938, remaining invisible, the Lord had initiated Shree with the 32 worded Krishnashakti mantra in the sanctum-sanctorum of Guru Mandir. Thereafter, on 12th March, 1942 (10th of the bright half of the lunar month Phalgun), the Lord had physically appeared before Shree outside the sanctum-sanctorum of Guru Mandir, for a Poornabhishek (ritualistic initiation) and performed the divine complete consecration of Shree with impartation of his powers by initiating him with Tripuri Mantra (a most Esoteric Mantra, considered highest and most Divinely Sacred). Shree was blessed with the ancient & supreme knowledge of Shrividya. 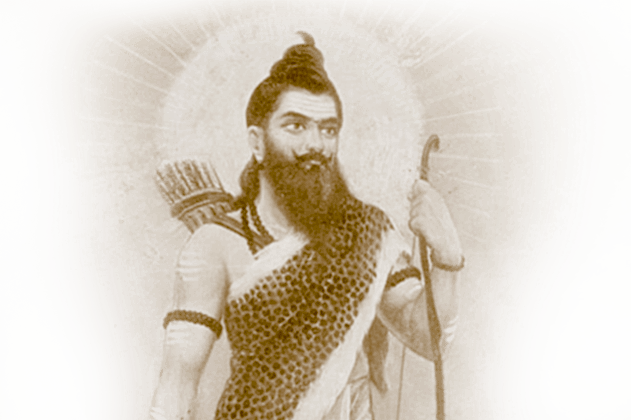 The book Maharnva tantra, based on the science of Tantra Vidya, describes the process of Poornabhishek in great detail. It is as same as the one consecrated on Shree. The book states that the One performing the ceremony and the undergoing the ceremony, both have to be 'Sadashiv- Lord Shiva' embodied. It is done only to an Avatar, as only He is capable enough to sustain the transfer of so much spiritual energy.
Lord Parshuram told Shree that He was being initiated in this highest spiritual process, to establish Satya Dharma as is espoused by the Vedas and spread the message of Happiness and Peace on the planet.

One day in a vision, was Shree was shown an image of four dogs on the verge of dying, by His Guru, Lord Parshuram. He was saying that these dogs were a metaphorical representation of the state of Dharma and Vedic wisdom and it is about to be lost forever.

Shree than decided to spend the rest of His life in revival of this ancient most knowledge as a Guru Dakshina (Tribute to Guru). So on the day of Vijaya Dashmi (an auspicious day), Thursday 21st September 1944, Shree took the vow “I will rejuvenate the Vedas”. And the Sapta Shloki or the Seven Verses, giving a gist of this wisdom was composed by Him instantaneously.

The Satya Yuga or the Era of truth and light began from this day. Shree said that soon world over peace, prosperity, happiness and harmony will take centre stage. A new era of Universal Brotherhood and Super Science will emerge.

The first Day when Shri Swami Maharaj appeared in Akkalkot, He showed the vision of Holy Fire. His arrival heralds the beginning of the fundamental and positive change in the universal spiritual thinking. He performed a Yajnya in Jangam Math (a temple belonging to Lingayat community) at Akkalkot. He ordered His disciples to arrange 500 cow dung cakes over the Shivalingam. A holy Fire was made and cows ghee, coconuts, wheat, rice were offered in it. When asked, “ Maharaj what are you doing?” He replied “I am performing Yajnya of my Deha i.e. outward body.“

On being questioned just prior to His Mahasamadhi by one of His close disciples “ When will you recover from your illness?” Shri Swami Maharaj replied, “ I will reappear when the hills and the mountains will speak and Pandhari will burn” Here too, through this cryptic remark, Swami Maharaj has given an indication of the future happening. He indicated the commencement of Satya Yuga and rejuvenation of the Vedas. Vedic Mantras were to reverberate through out the world and Fire worship which is the basis of Spirituality of the ancient knowledge was to prevail through out the planet. Swamiji was indicating that the One who would come after me would give the world a message of peace and global oneness.

Shree, was fourth in line of Shree Swami Samarth Tradition. After taking the Vow, Shree composed the Sapta Shloki or Seven Verses, which is a gist of the Vedic Wisdom and denote the five Tenets of the Panch Sadhan Marga (Five Fold Path). 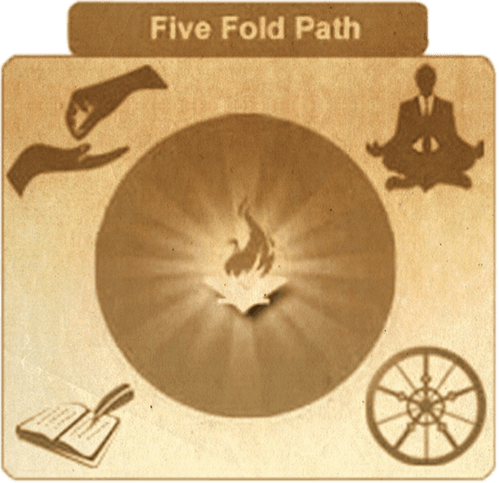 Shree introduced the path for achieving personal transformation, social reform and global harmony by way of Pancha Sadhan Marga (PSM). PSM is the gist of the teachings of the Guru Tradition and is based on ancient Vedic Wisdom.

Shree referred to PSM as Devayaan. Devayaan is a Sanskrit word that means Path of Light. Shree said that by following Devayaan even the Gods attained Godhood and the Rishi’s attained their knowledge. He rejuvenated the ancient most Upasana- Path towards Oneness, the practice of Agnihotra. Agnihotra is a technique for healing and finding inner peace which has transformed the lives of thousands of people around the world going beyond the man- made barriers of caste, creed, race, nationality and religion.

He called it the Mukti Ka Raj Marga (path towards liberation). He said that Agnihotra and the tenets of PSM are a Yuga Dharma (Yuga- era or age, Dharma-Way of life), Vishwa Dharma (Vishwa- World, Dharma- Way of life) and Siddhanta (proven over time).

He revived the ancient most practice of Agnihotra, Sattvic Yajnya (Fire Ceremony) and other Vedic Sciences, age old practices forgotten over time. He removed the wrong concepts prevalent in the society and explained the original meaning of many spiritual practices

Shree stressed that the teachings of the PSM are not limited to any group, sect or community.

He said that everybody has a common right upon the world of knowledge and each and every one has the right to use it for the betterment of themselves and their families. There can never be any distinction over caste, creed, nationality, colour, region, language, etc. All such barriers are man-made and not dictated by any God. Such boundaries cannot exist in spirituality or even in day to day life. God has created everybody as equal and all are His children. He will never differentiate amongst His own children. For thousands of years, spirituality and its practices had become corrupted due to various misinterpretations and misunderstandings leading to a lot of confusion and strife.

He urged everybody to learn and follow the tenets of PSM to replace negativity and darkness with positivity and peace in their lives.

Mantra Diksha given by an invisible Guru.

Samadhi of Swami Shivananda and Foundation of Shivpuri

Shree moves His residence to Shivpuri